About “Devil in the Hills”

This music project was first inspired by a story produced by West Virginia Public Broadcasting about an old coal company store in Fayette County, WV, known as the Whipple Company Store. Owners Joy and Charles Lynn had purchased the historic building in 2006 with plans to restore it and create a museum. Soon former coal camp residents began making pilgrimages to see the old store again and to share their families’ stories. Most of these men and women were in their 80s and 90s and had lived at the camp as young children. The stories they told were often dark and disturbing, kept secret within their families for decades. 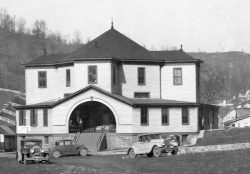 These stories from the Whipple Company Store and similarly bleak recollections of coal mining and railroading life from other parts of West Virginia have been suppressed for too long. At first, the people themselves kept silent and hid the stories out of fear and indignity. When they finally shared their tales, their validity was often doubted, shaming them into believing that silence may have been the better choice. And now the people who shared these stories are gone. It is up to us to remember and continue sharing our history from the perspective of the people who lived it.

A 7th generation West Virginian, Mary was born and raised in Paw Paw, WV, an old canal and railroad town which, at the time, had a population of 600. Her high school graduating class consisted of 11 students. With just under 500 people at the last census, it’s still as small town as it gets.

Mary’s great great great grandmother, Elizabeth Shanholtz Hott (1829-1910) at her home in Hampshire County, WV. A local history book states “Lizzie made wine, and her home was open to storytellers.”

Like many singers, she got her musical start singing in church – the Paw Paw Methodist Church children’s choir. She was four and her mother was the church pianist. Years later, at 87, her mother still plays piano every Sunday at the same church. By the time Mary was a teen her mother had her substitute on piano, or she was singing and playing guitar, for special church services, weddings and funerals along the preacher’s circuit of small Methodist churches that dotted the countryside.

After 26 years in New York City and Boston for college, music and work, she was ready to make that often-perilous emotional journey home. To this day, that sense of community and continuity that is so strong in West Virginia remains a driving force in both her life and music.

Being back home revived her interest in the plight of West Virginia and Appalachia. Mary immersed herself in the stories of the state’s ubiquitous coal culture, which became the motivation to expose the horrendous treatment that coal miners and their families endured. And she was able to draw some parallels to the slave-like conditions and unmarked graves of workers who built the C&O Canal and railroads in her hometown area.

Mary wanted these stories to touch people in ways they hadn’t in the history books.  Music and storytelling seemed to be the path.  The result is her latest musical project titled “Devil in the Hills.”

When Mary was considering who to bring together as a band to perform and record her newly penned songs, it was the WV-based, southern gospel-fueled, harmony-rich sound of The Carpenter Ants that stood out as an obvious choice to support the sound she was looking for.

The album was produced by Don Dixon and Michael Lipton, and recorded in 2019 in Charleston, WV with Dixon also taking on the role of recording engineer. In addition, you will find Don’s charismatic voice on a special track found only on the CD. (One more reason to buy a copy!)

Besides his role as co-producer, Michael Lipton teamed with Mary to co-write much of the music on the album. The Carpenter Ants are:  Michael Lipton (guitar), Ted Harrison (bass), Jupie Little (drums), and Charlie Tee (lead vocal). The foursome have been performing together for over 30 years to an international audience of fans.